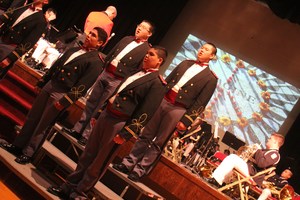 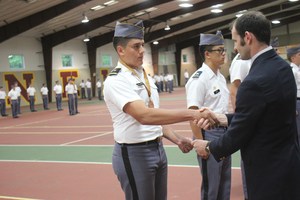 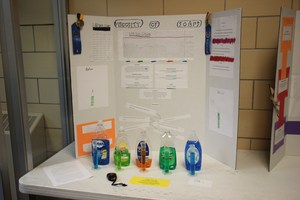 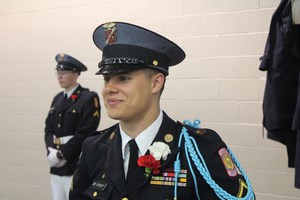 Spring Family Weekend 2017 kicked off on Friday, April 28 with the Duke of Edinburgh’s Award and AMCSUS Medal Ceremony in the MMA field house.

The ceremony began with recognition of Gabriel Elizondo ’17 and the fourteen members of his drill team, who took second place out of 16 teams at the Association of Military Colleges and Schools of the United States (AMCSUS) Close-Order Drill Competition.

Each competing team was given a sealed envelope. The cadet commander had 60 seconds to review it and then execute the movements on the card. From the opening of the envelope to the completion of the march, the entire drill was videotaped continuously and executed only once under supervision. The videos were then judged by a panel of impartial military officers.

Winners were announced February 27 at the annual AMCSUS conference in Arlington, Virginia.

“I want to congratulate our drill team for finishing second in the nation,” McGeorge said. “I am so proud of our boys, as were all the [AMCSUS school] presidents.”

For the third consecutive schoolyear, the Academy offered cadets the opportunity to earn Duke of Edinburgh's Award medals. To earn a DOE award, cadets must provide community service, cultivate a skill, complete physical training and plan and embark on an Adventurous Journey.

"It is a display of continuous commitment and development in character," Peters said of the award.

Parents were then invited to peruse middle school science fair displays set up in the second floor middle school hallway. Below are the contest results.

The festivities continued Saturday evening with the annual Festival of the Arts, which featured songs by the High School Band, Jazz Band, Middle School Orchestra and Cadet Chorus. Performances were punctuated by the presentation of journalism, band, choir and art awards.

Several student-journalists were recognized for their contributions to the Taps and Eagle during the 2016-17 school year.

Each year, the journalism bar is awarded to those students who go above and beyond the basic duties of a cadet photographer. Recipients of the journalism bar must display exemplary conduct and significant written or photographic contribution to the production of the yearbook and newspaper.

Following the presentation of journalism awards and a performance by the High School Band, Festival of the Arts attendees were invited to peruse the Epple Memorial Art Show in the Centennial Gymtorium Mezzanine.

Cheryl Morris next took the stage to present middle and high school art awards. The star of the show was senior Zenghui Zhang of China, whose artwork appeared on the Festival of the Arts program. Zhang received the first-ever Senior Award for portfolio achievement, having blown away representatives of Washington University at National Portfolio Day on October 23.

"The college professors have seen a million portfolios. They were blown away by Zhang Z's pieces. His use of color, his use of line, they couldn't get over it," Morris said.

Samuel Carr '18 and Victor Vielledent ’22: The Heart & Soul Award for dedication to projects

Gregory Prinster '17 and Timothy De Groot '18: The Jackson Pollock Award for the most active students during the second semester

The evening concluded with performances by the Middle School Orchestra and High School Band as well as music awards presented by bandmaster WO2 Andrew “Freddie” Lomas.

First up was the Best Middle School Musician Award, which went to first violinist Mario Garcia '21. As part of a new middle school art and music pilot program, seventh and eighth grade cadets studied both violin and clarinet during the fall 2016 semester.

"It's been so far a very successful program," Lomas said. "The second semester we then allowed the boys to go on to choose a band instrument."

“He shows real potential in the art of jazz music,” McGrath said of the junior.

The day began with a senior class pancake breakfast fundraiser in the MMA Dining Hall. Up next was a battalion review and flower pinning ceremony.

During this traditional MMA event, mothers pin their cadet with a red carnation provided by MMA. Mothers and grandparents who cannot attend are represented by a faculty member or other MMA mother.

During the battalion review, one cadet from each LET level received the Superior Cadet Award. Students received the honor for displaying leadership potential, discipline, courtesy, character and excellence in military and academic scholarship.

Later that evening, cadets and their families gathered in the Memorial Chapel for the weekly Vespers service, which featured a special guest speaker: General John “Black Jack” Pershing played by Paul Baum.