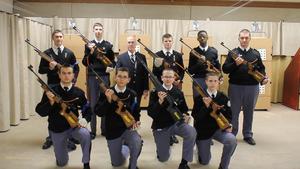 Congrats to the MMA Rifle Team for its recent successes, most recently at the U.S. Army Marksmanship Unit Sectional and the National Qualifier. Among contestants at the former, two of MMA's teams placed in the top five, and four of MMA's firers have qualified to compete at Camp Perry, Ohio, as part of a team at Nationals.
MMA's Rifle Team has shown incredible commitment through practicing firing skills as individuals and as a team — and that work has been rewarded in an impressive victory at the U.S. Army Marksmanship Unit Sectional at St. Louis High School this weekend. Of 14 teams and more than 900 competitors, MMA's Rifle B Team placed third and A Team placed fourth. Their achievements are as follows:
Of the 938 competitors in the sectional:
Bullington placed 187th
Baker placed 243rd
Of the 81 firers physically present at the sectional:
Bullington placed 8th
Baker placed 12th
Hughes placed 24th
Dawson placed 25th
Newland placed 26th

Of far greater consequence, the results of the National Qualifier are official. In an impressive display of talent, four of MMA's firers met the standard at the qualifier to compete at Nationals at Camp Perry, Ohio. Cadets Bullington, Henry, Abiyants and Hughes have collectively qualified to represent MMA as a team, an honor which has not occurred for several years.

MMA is proud to recognize our outstanding cadets and encourages them to keep working hard toward success. There will be one more opportunity for cadets to be accepted to compete at Nationals after winter furlough. Coaches Capt. Joseph Balvanz and former faculty member Mike Shoemaker look forward to continuing their work of helping cadets improve as firers and teammates.